Cardiac Tamponade with a focus on medical imaging


Introduction:
Cardiac tamponade is the compression of the heart muscle, caused by a build-up of blood or fluid between the myocardium and the Pericardium, this pressure prevents the ventricles from fully expanding, which can have a large range of effects on the body, it effects 2 in 10,000 people in the UK, therefore, medical imaging has begun to play an important role in diagnosing cardiac tamponade and techniques have been developed in many of the different imaging modalities to help with this process.

Anatomy and Physiology of the Heart wall and the Pericardium:

The heart walls muscle tissues, or myocardium, is composed of specialised involuntary muscle cells, known as “myocardial cells”, these cells are grouped in bundles in a connective tissue framework (Tortora, 2011 Pg. 760). Within this framework are; small blood and lymphatic vessels and autonomic nerve fibres, the density of the capillaries found in the myocardium is much denser than in skeletal muscle tissue, according to Wear (1927 Pg. 280) there is one capillary to each muscle fibre, this is to supply enough oxygen to the muscle so as they can carry out the many contractions required per minute (average of 60-70 BPM) resulting in a high requirement of blood and its energy providing nutrients 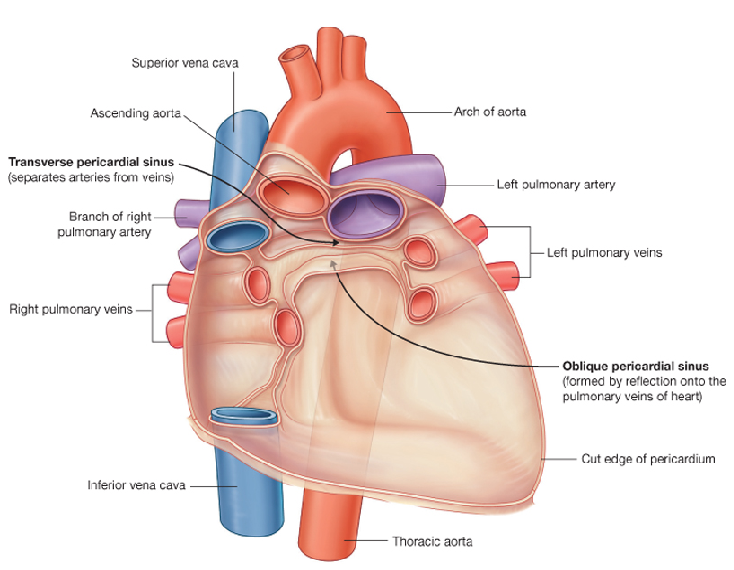 The outer parietal layer is made up of connective tissue which is fused to the fibrous pericardium (Sinclair, 1975 Pg.163), this helps to maintain the position of the serous pericardium during contractions.
The inner visceral layer, also known as the “epicardium”, is classed as one of the layers of the heart wall, (Tortora 2011 Pg. 758).  As it adheres tightly to the surface of the myocardium, sliding smoothly beneath the parietal layer, with little friction between the two, (Sinclair 1961 Pg.163) due to the pericardial fluid within in space between them (Tortora, 2011 Pg. 758).
Between the two layers in the “pericardial cavity” is found a thin film (a few millilitres) of serous fluid (Tortora, 2011 Pg. 758), this slippery substance, is produced by the pericardial cells of both the parietal and visceral layers of the serous pericardium, its function is to reduce friction between the 2 layers when the heart moves.

In classic cardiac tamponade, the pressure within the pericardial sac increases due to an accumulation of fluid within the pericardial space (known as a pericardial effusion) (Saito et al. 2008) , as a result of ,this ventricular diastolic, right atrial and wedge pressures all increase in equal proportions to the increase in pericardial pressure in an attempt to prevent any chambers from collapsing,( Blum and Bella, 2012),  this equalization of pressure is the “haemodynamic hallmark” of cardiac tamponade, (Blum and Bella, 2012) however, eventually, if left un-treated, the pericardial pressure will become greater than the pressure in the chambers, resulting in chamber collapse of at least one of the cardiac chambers. (Spodick 2003 Pg. 686)

Also found in cases of classic cardiac tamponade, the pericardium becomes stretched due to the excess fluid build-up, (Blum and Bella, 2012) and due to the inelastic nature of the fibrous pericardium, any increases in pressure within the pericardium can lead to a greatly exaggerated respiratory variation of the filling of the right and left ventricles (Spodick 2003 Pg. 685) . During inspiration, the negative intra-thoracic pressures lead to an increase in the venous return of blood to the right side of the heart, (Blum and Bella 2012) this leads to an increase in blood volume in the right side of the heart, which, in turn, exerts a pressure on the intra-ventricular and intra-atrial septum’s (Restrepo et al. 2007 ), pushing them towards the left side of the heart, encroaching on the space within the left side of the heart, this is known as “Ventricular Interdependence” and leads to a decreased cardiac output with each inspiration.

As there is less blood in the left ventricle to be transported around the body, a decrease in systemic blood pressure is often seen in cardiac tamponade cases, if this decrease in pressure is greater than 10mmHg it is known as the “pulus paradoxus”. (Blum and Bella 2012)

Cardiac tamponade can also occur when there is localised tamponade without a generalised effusion throughout the pericardium, in patients with low central venous pressures, when there is an accumulation of fluid within a stiffened pericardium or when there is a large pleural effusion which impacts of ventricular filling, however, these causes are less common than classic Cardiac Tamponade (Blum and Bella 2012)

2 in 10,000 people are likely to suffer from cardiac tamponade at some point in their lives, (Medline Plus, 2012) however, people who put extra strain upon their heart; smokers, obese patients for example, who increase their risk of needing heart surgery or having a heart attack, also increase their risk of suffering a cardiac tamponade. (University of Maryland Medical Centre, 2010)

When an effusion has developed within the pericardial sac over time, there are often few noticeable symptoms, the patient may complain of dyspnoea (laboured breathing), a dull pain in the chest, swollen ankles, and some abdominal bloating, (Yarlagadda, 2012)  chronic effusions are often detected as an incidental findings during other imaging of the thoracic cavity.

Acute effusions occur when there is a rapidly accumulating smaller effusion within the pericardial sac, acute effusions often present with cardiac tamponade, (Blum and Bella, 2012) patients present with similar symptoms to that as in chronic effusions with a few extra symptoms such as elevated neck veins, which are due to the increased venous return of blood to the heart. (Avşar et al. 2008)
The heart loses its ability to fully relax and contract due to the increased pressure placed upon it by the pericardial fluid, there is also often a threatened or actual, collapse within the circulatory system, (Spodick 2003 Pg.688) normally within the heart itself due to the increased pressure within the right side of the heart, it is during an acute effusion that the patient may potentially suffer from “pulsus paradoxus” (Blum and Bella 2012)
A chest x-ray of an acute effusion may demonstrate globular cardiomegaly with sharp heart margins, known as a “waterbottle silhouette” (Restrepo et al. 2007 ), and an ECG study may demonstrate small complexes and electrical alternans may be seen (Appendix i). (Restrepo et al. 2007 )

Patients may also present with;
Imaging studies
On a chest x-ray of a patient with cardiac tamponade, the cardiac silhouette may be enlarged and it may or may not present with an epicardial fat pad sign, which would normally suggest a pericardial effusion (C. S. Restrepo et al. 2007 ) The lungs, are normally clear in cardiac tamponade, however some causes of cardiac tamponade may have other symptoms affecting the lungs (Medline plus, 2012). While X-ray is both relatively cheap and quick, chest imaging with plain film X-ray may not be useful in early cases, as at least 200mL of the pericardial fluid must have accumulated before there is any enlargement that can be seen on a chest radiograph. (Restrepo et al. 2007 ) 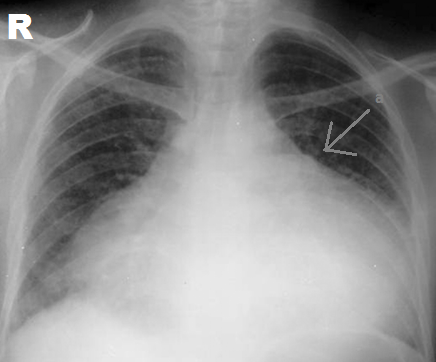 Chest x-ray of cardiac tamponade secondary to tuberculosis
Echocardiography
A transthoracic echocardiogram (TTE) uses ultrasound to capture real time images of the patients heart (Medline Plus, 2011), in cases with cardiac tamponade, there can be seen to be restricted contraction and relaxation of the heart walls due to the increase in pericardial pressure (Lindqvist and Calcuttea and Henein, 2007), images produced can be either three-dimensional or two-dimensional depending on the area of the heart that is being imaged and the typed hardware being  used. However, occasionally the patients; ribs, lungs or other bodily tissues may interfere with the sound waves meaning a diagnostic image cannot be acquired, in such a case either IV contrast can be used, or a Transoesophageal echocardiogram (TEE) is performed. (Medline Plus, 2011)

During a TEE an ultrasonic scope is inserted down the patients, anesthetized, oral cavity, the scope can be guided down the esophagus by a radiologist to acquire a clearer image of the patient’s heart. (Bupa, 2012) 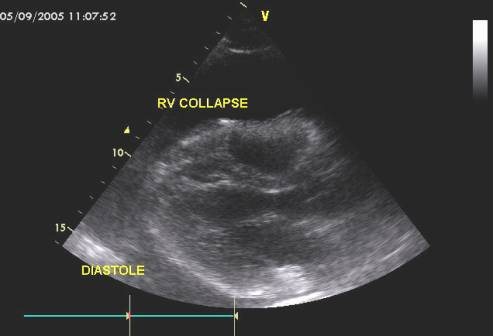 CT provides information about the nature of some of the underlying causes of Cardiac Tamponade, such as pericardial effusions, by using the attenuation measurements of the fluid collecting in the pericardial cavity. (Restrepo et al. 2007), (Appendix 1)

Magnetic Resonance Imaging (MRI) allows pericardial effusions to be detected with a very high sensitivity (Restrepo et al. 2007)  with the ability to gather signals from fluid collections as small as 30 mL, however, due to the potential acute onset, and life-threatening nature of the condition (J.P. Surg, 1998), MRI has a limited role in diagnosing cardiac tamponade, although, there have been cases of imminent cardiac tamponade and cardiac rupture that have been discovered as incidental findings (J.H. Sohn et al. 2005 Pg. 448), the heart may have a “paradoxical septal bounce”, which can easily be seen on short or long-axis MR images. (Restrepo et al. 2007)

Summary
Cardiac tamponade is a rare heart complication, caused by an acute pericardial effusion, its main impact is the increased pressure upon the heart muscle, reducing its ability to contract and relax, it can also cause cardiac chambers to collapse. Diagnostic imaging plays an important role in diagnosis of cardiac tamponade, as well as the possible causes behind it, with echocardiography being the “gold standard” for diagnosis, despite Computed Tomography’s ever increasing detail.

Appendix 1
ECG
An Echocardiogram of a patient’s heart who is suffering from cardiac  tamponade may have changes in all 4 main sections of the ECG (Friedman, 1974 Pg. 261-262);
P wave voltages are either maintained, or will increase, and in the majority of cases the p wave contour will become peaked however, the appearance of an atrial rhythm prior to the electromagnetic dissociation develops could obscure any P wave changes, the increase of P wave voltage normally correlates with the change in venous pressure, but this is not true in all cases. (Friedman, 1974 Pg.261)

In some cases, there can sometimes be ST segment changes noted, either becoming elevated or depressed, however, these changes are only seen after prolonged hypotension. (Friedman, 1974 Pg. 262),